Hillsdale College was founded in 1844 with a strong Christian and abolitionist grounding. In 2019, Christ Chapel was built to mark its 175th anniversary. The 27,000-square-foot Chapel was designed by prominent ecclesiastical architect and University of Notre Dame professor Duncan Stroik, who received a 2021 Palladio Award for his design. It is considered the first new religious chapel of this magnitude to be built in over 70 years in the United States. Working with Weigand Construction, Heather & Little brought their expertise to fabricate the components of the copper clad dome as well as the copper repoussé pinecone finial.

The Pinecone: A Symbol of Enlightenment, Resurrection and Eternal Life

The H&L team are particularly proud of the pinecone finial. Professor Stroik had identified that he wanted a pinecone, but the details and design were entrusted to our artisans. The pinecone was first drawn by hand, then the 5’x3’ finial was created using the traditional repoussé technique which entails hand-hammering a copper sheet into a handmade mold. This is the same technique used on the Statue of Liberty, although on a much smaller scale. The sections of the pinecone were soldered together and finished to appear seamless. It’s a painstaking procedure, requiring skill, patience and experience to get just right.  Approvals were obtained remotely each step of the way by sharing sketches and photographs. Considering its ultimate destination in a church, it's perhaps apt that it called for a leap of faith when delivering the final pinecone finial. After only sharing the piece in a 2D representation, would it live up to the expectations of the owners and architect? It did, and the pinecone found its pride of place atop the copper dome.

Copper Dome Panels: Each One Unique.

Creating the copper dome was an enormously challenging project. The copper dome panels were laid out in a pattern consisting of 3-courses of tapered pans with standing seam locks. The dome included raised rib pans every seven tapered pans to achieve the final aesthetic and the roof's water tightness. Moreover, joints had to be staggered. Each panel was unique, and had to be carefully laid out by hand and have a compound curve applied to fit the dome structure in Michigan. This demanded a large dose of confidence and trust as we were not able to test the fit on site prior to transporting the finished components to Michigan. Our math had to be perfect. When it came time to install, the dome went up without a hitch, a testament to our skilled craftsmen and the powers of math. To learn more about the Christ Chapel Pinecone and Dome, browse our gallery of images. 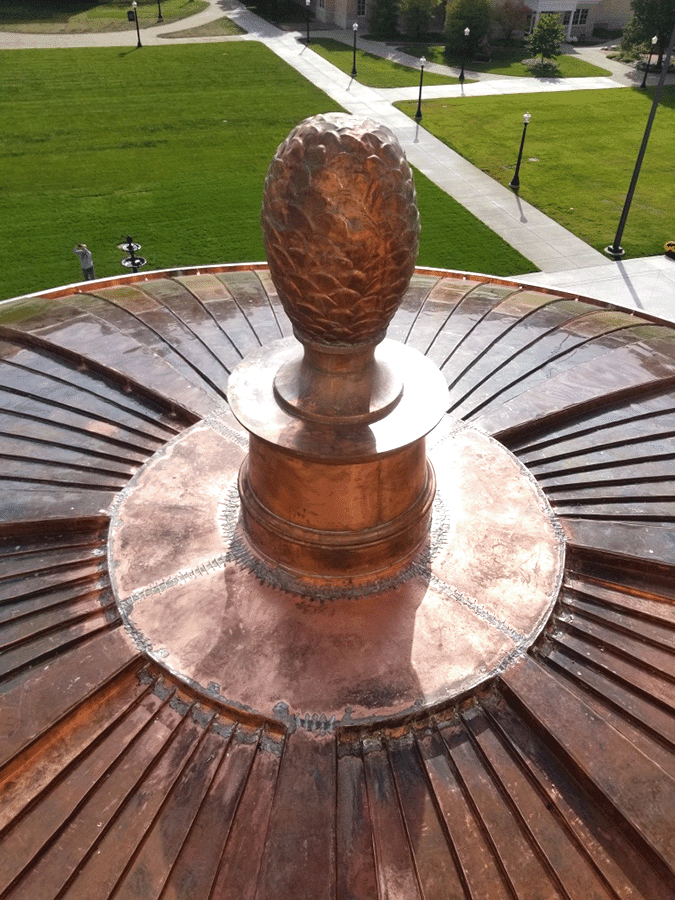