Postal Station B, Ottawa, ON

Postal Station B, also known as the Central Post Office, was built between 1938 and 1939, as part of the Confederation Square redevelopment, and is a fine example of the Classical and Château styles used in civic buildings during the 1930s.  It is a Classified Federal Heritage Building within the Parliamentary Precinct in Ottawa.

Previous renovations had not made heritage considerations a top priority for this landmark, however when it came time to perform the latest restoration, this attitude was fully reversed. Working with Schoeler & Heaton Architects Inc. and Robertson Martin Architects, Heather & Little took on the major task of replacing the building’s mansard roof and ledge, as the copper elements were at the end of their life-cycle. During the implementation of this project, H&L needed to work cooperatively and coordinate with a large scale multidisciplinary team; not just the architects, but masonry experts, carpenters, scaffolding trades, and electricians . Moreover, everyone involved was working under tight time restraints as the work needed to be completed to accommodate Canada 150 Celebrations.

This project involved the repair, conservation and replacement of standing seam and flat lock copper roofing assemblies as well as copper-clad in-laid gutter –  a unique architectural detail. Additionally, H&L helped to finalize design details while taking into consideration the original work found on the existing roof.

Conservation of Copper Roof with Improvements

The supporting activities for the restoration of the copper roof were exacting. Original elements were documented and seam locations and sight lines were recorded in order to ensure that the aesthetic value of the historical roof was maintained. Original materials were kept as samples and detailed condition reports were prepared for each portion of the copper roofing.  Rounded elements of the mansard roof were recorded using templates and photo documentation.

Postal Station B displays H&L’s commitment to implementing both traditional artisanal methods along with the best new practices to ensure an ideal outcome. For example, original construction methods (hand seaming, tool marks, etc.) were utilized in the replication of the copper roofing. Architecturally significant design elements such as copper dormers, rounded mansard on the Elgin street face and copper in-laid gutter were replicated using a mixture of photo documentation, templates, samples and shop drawings.  Fabrication details of the original elements were mirrored as much as possible unless an improved detail (that did not affect the design) could be implemented.  Additional counter flashing was added to the in-laid gutter to protect vital masonry/copper intersections.

A variety of key improvements were made in various locations of the copper roof to enhance functionality, performance and water shedding. The new copper roofing was connected to the substrate using hidden clips and fasteners that were spaced according to industry standards. The use of rivets was minimized to ensure reversible assemblies.  Solder was used in specific locations to secure assemblies for flashing and roofing elements while strongly considering the risk of long term failure due to expansion/contraction of the adjacent materials. Soldering was performed using the appropriate amount of heat to ensure that the joints met longevity goals for the roofing system.   Many of the seams in the in-laid gutter were locked and then soldered to protect from water infiltration.

Flashing using copper, and lead-coated copper was used for this project. Flashing elements such as valleys, ridges, hips, rakes, dormers, wall intersections, gables, ledges, drip edges and many more were utilized to protect masonry elements as a part of this project.

Winner of the North American Copper in Architecture Award (NACIA). To learn more about this project, see the images below. 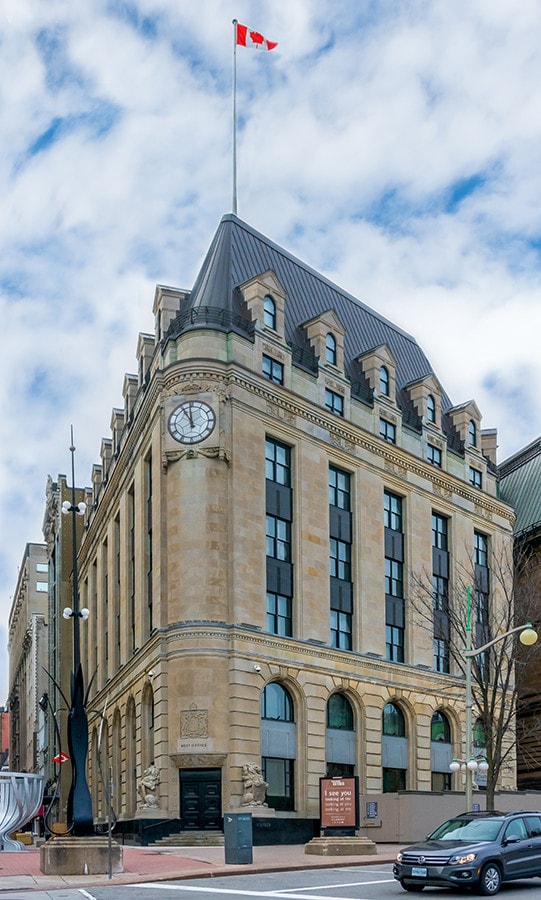 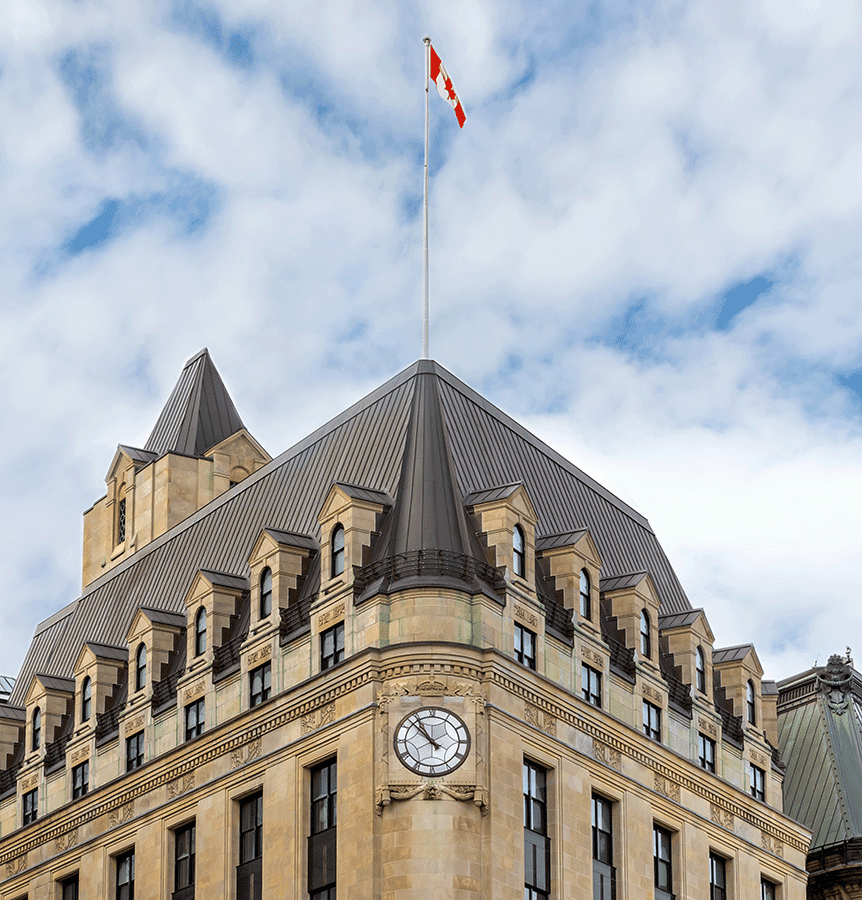 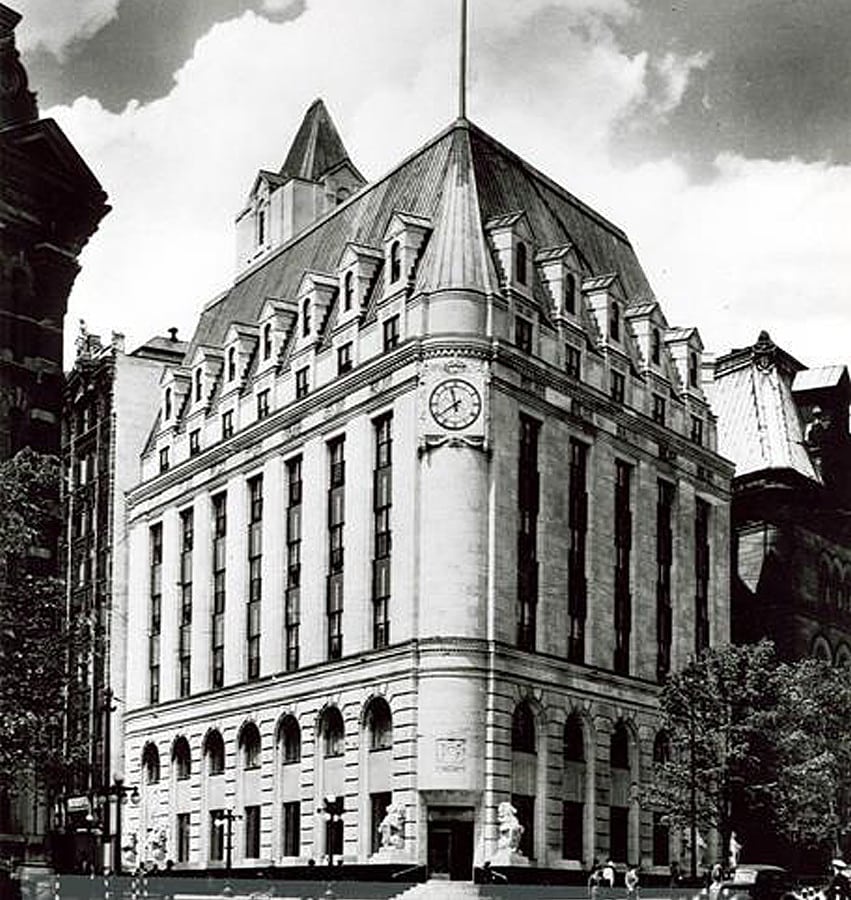 Postal Station B circa 1940. Photo: National Library of Canada 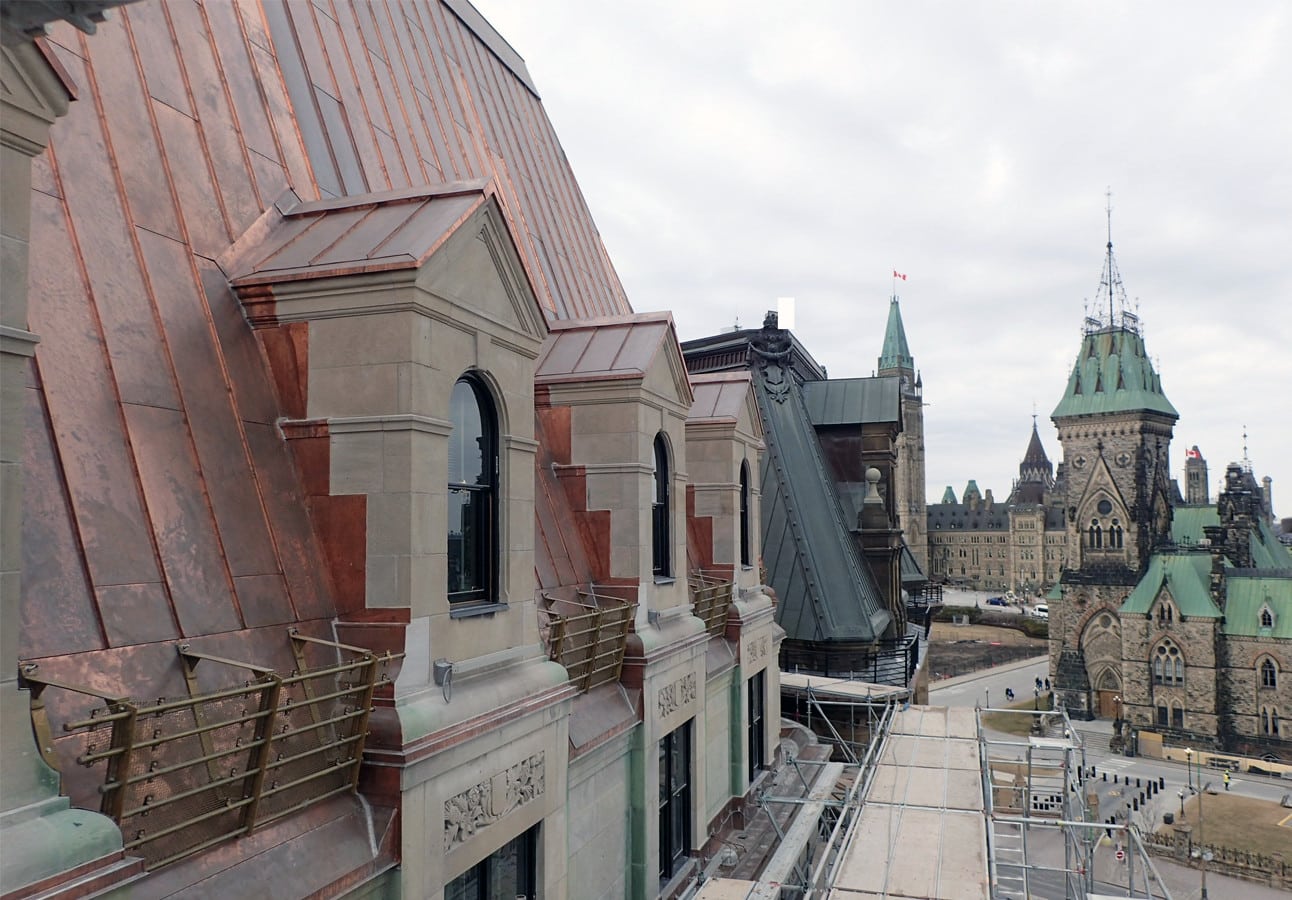 Mansard roof restoration with a small detail of the oxidized roof of the Office of the Prime Minister and Privy Council directly behind. Photo: Robertson Martin Architects.