Sainte-Anne-des-Chênes, is one of the oldest franco Catholic parishes in Manitoba. In July 1904, the parish received the gift of a primitive crowned woman and crowned child statue, and it was installed in an exterior niche of the Romanesque-style church. It has stood in its lofty perch for more than a century, while the years and the elements slowly took their toll. Today, no one knows the age or provenance of the statue, only that it came from Montreal and it was thought to be made of tin. However, it is much beloved, so the parish reached out to Heather & Little to perform needed repairs.

The parish identifies the statue as St. Anne and her daughter the Virgin Mary. The crown is a symbol associated with St. Anne, and the statue’s index finger points to heaven, possibly a nod to the da Vinci sketch depicting the saint with the same gesture. Little else was known about the statue and the parish were hopeful that H&L would be able to shed some light on the statue’s history while restoring it.

It’s quite an intriguing piece. Metal statuary became quite popular during the late 19th and early 20th centuries. Many manufacturers offered cast iron, zinc, or sheet metal statuary, and interested parties could order the preferred subject matter from catalogues. Zinc statuary was the most affordable option of all. These statues were hollow construction, and manufacturers used molds to make multiples of their popular models. The St. Anne statue however is a solid wood carving, that has been covered with hammered sheet zinc. It was a very unusual form, which we had never seen before and even after performing a physical investigation of the structure, St Anne and Child held onto its secrets. Nevertheless, our artisans approached it as we would any restoration project – removing the weathered finish of corroded paint as well as the damaged zinc, repairing the damaged or rotted portions of the underlying structure and re-covering the exterior surface with new sheet zinc. The base held the most damage, as well as the eyes used to secure the statue in its niche. Cracks in the exterior cladding had allowed water to penetrate and settle in the base. Once the statue was repaired, it was sealed with a durable UV resistant paint to protect the zinc from the elements. Enigmatic St. Anne made the return trip to her church adjoining the Seine River in Manitoba, and was reinstalled in her niche, to watch over the parishioners for years to come. To learn more about the St. Anne statuary restoration browse our gallery of images. 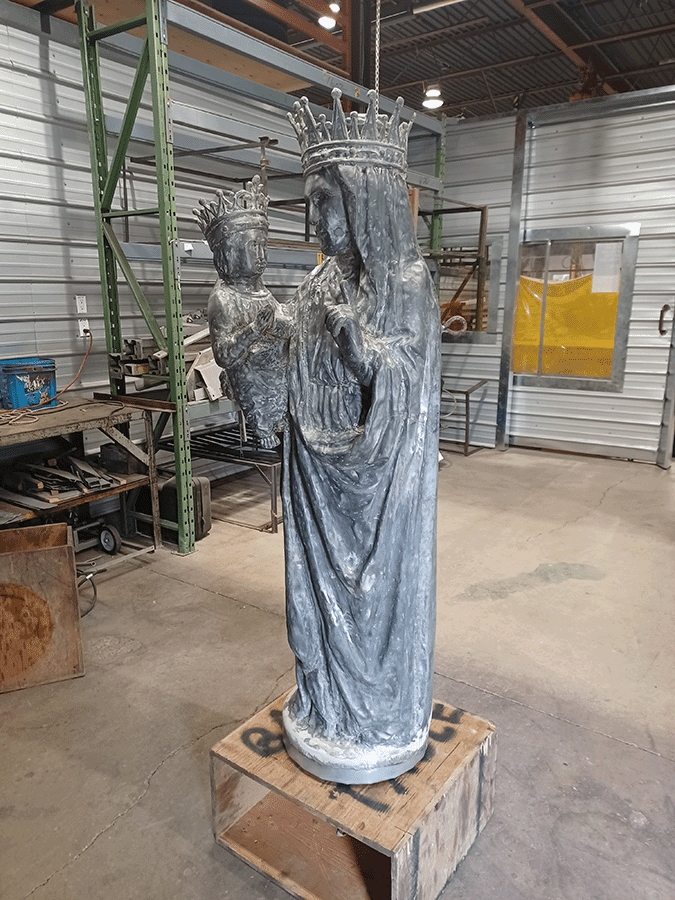 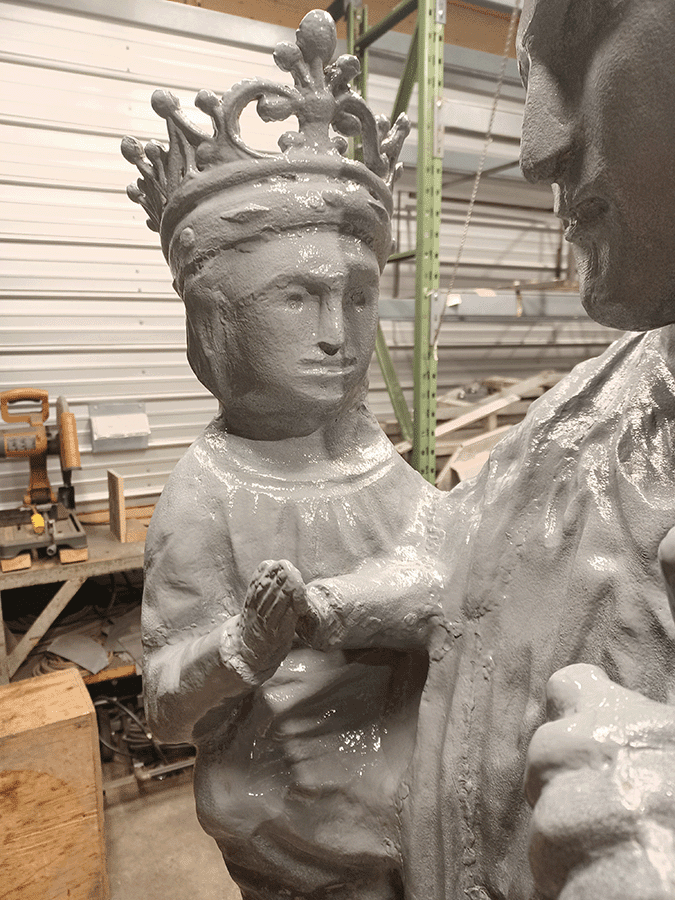 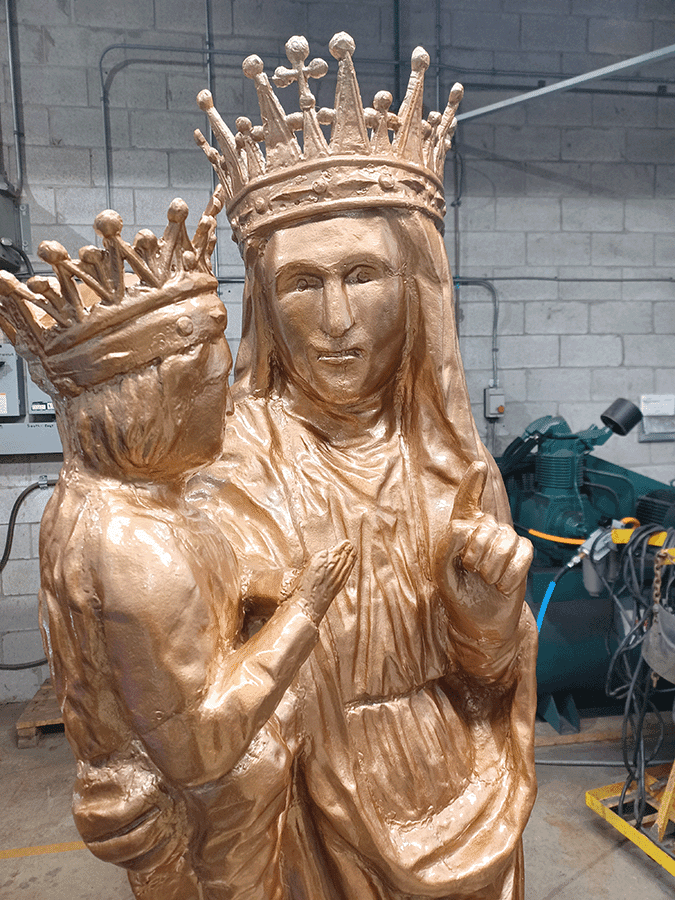 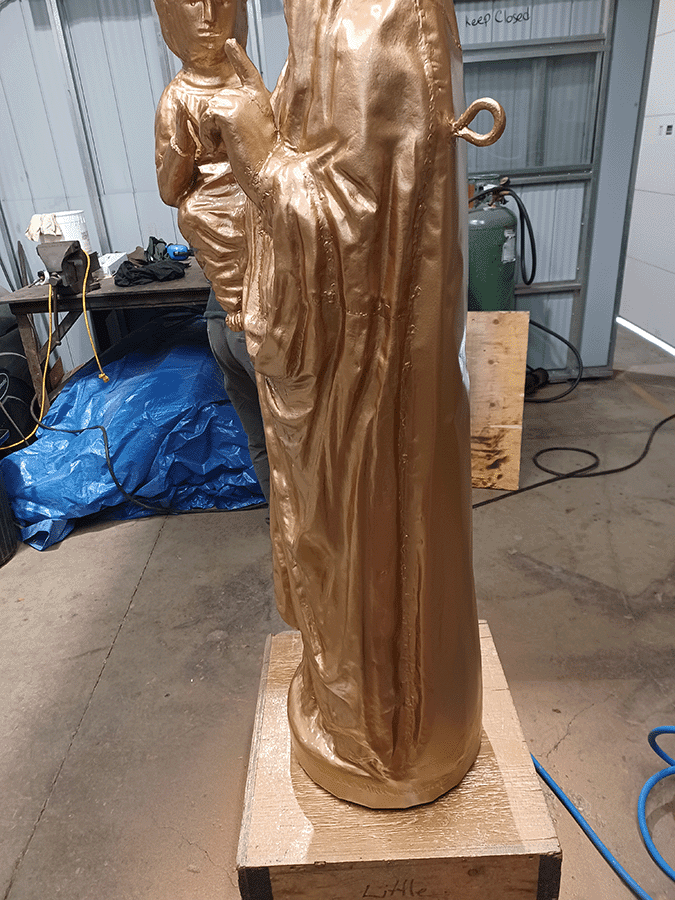 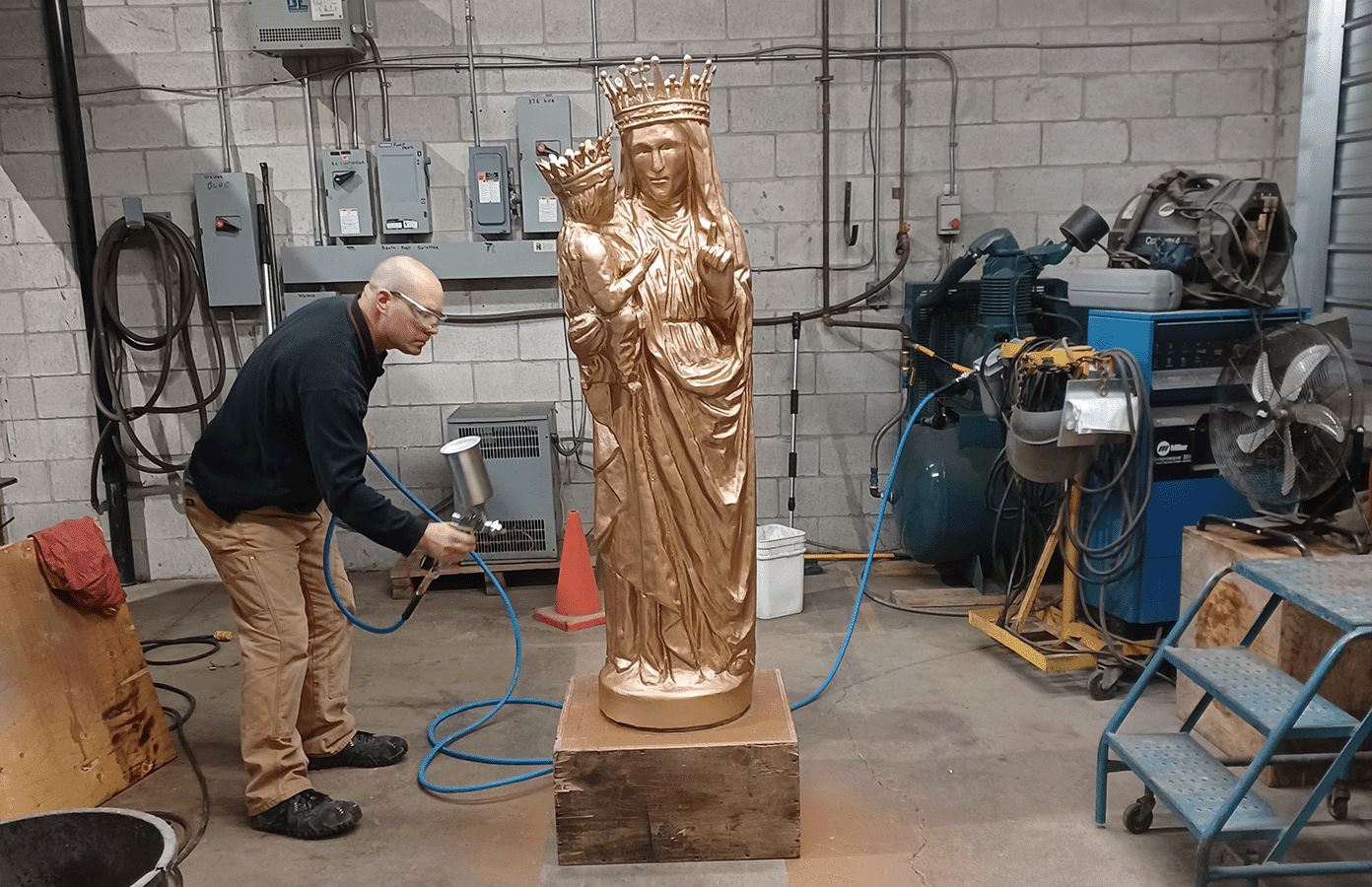 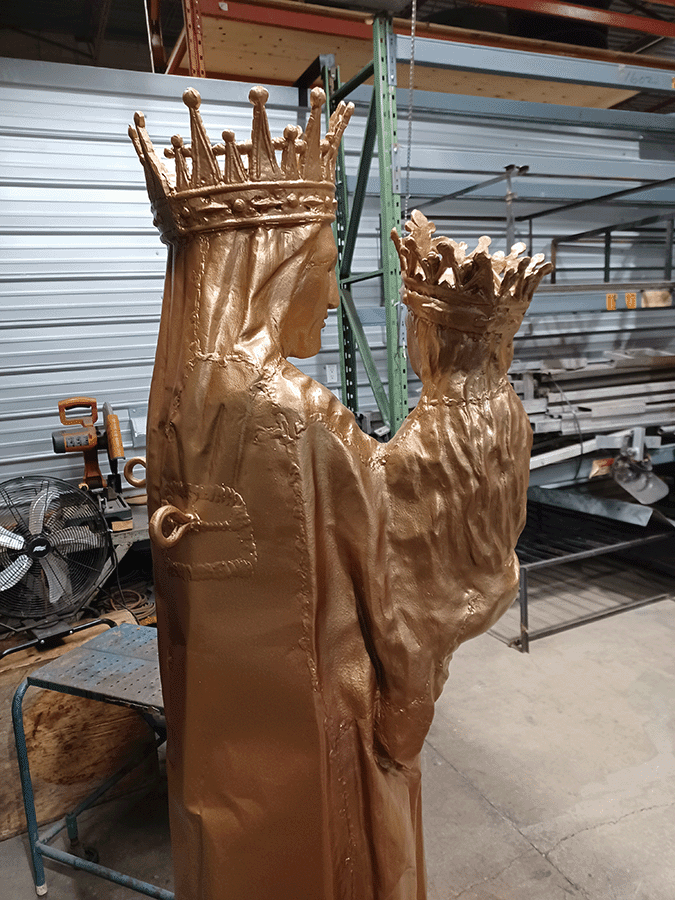 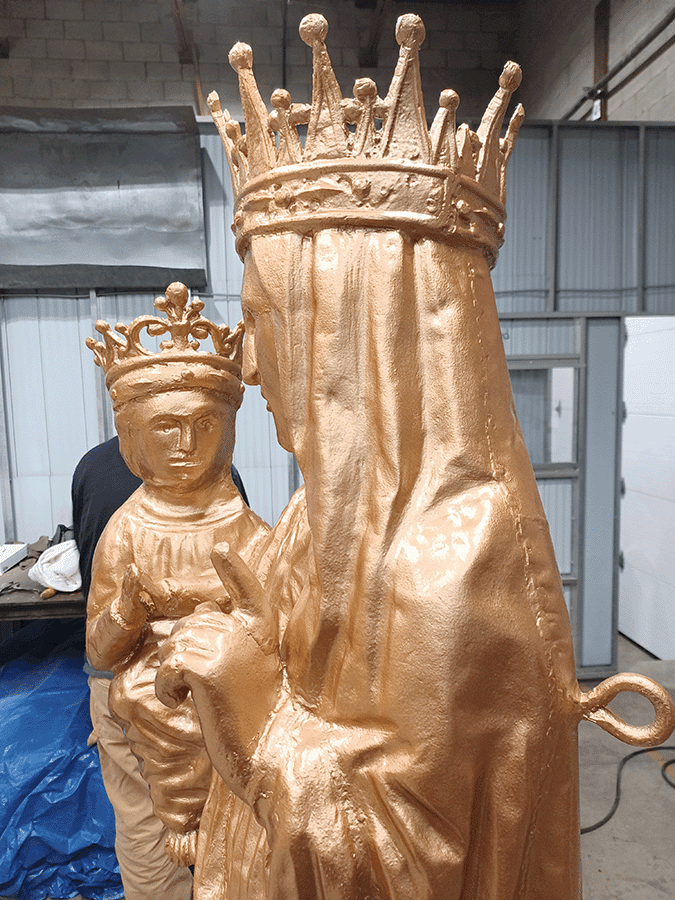 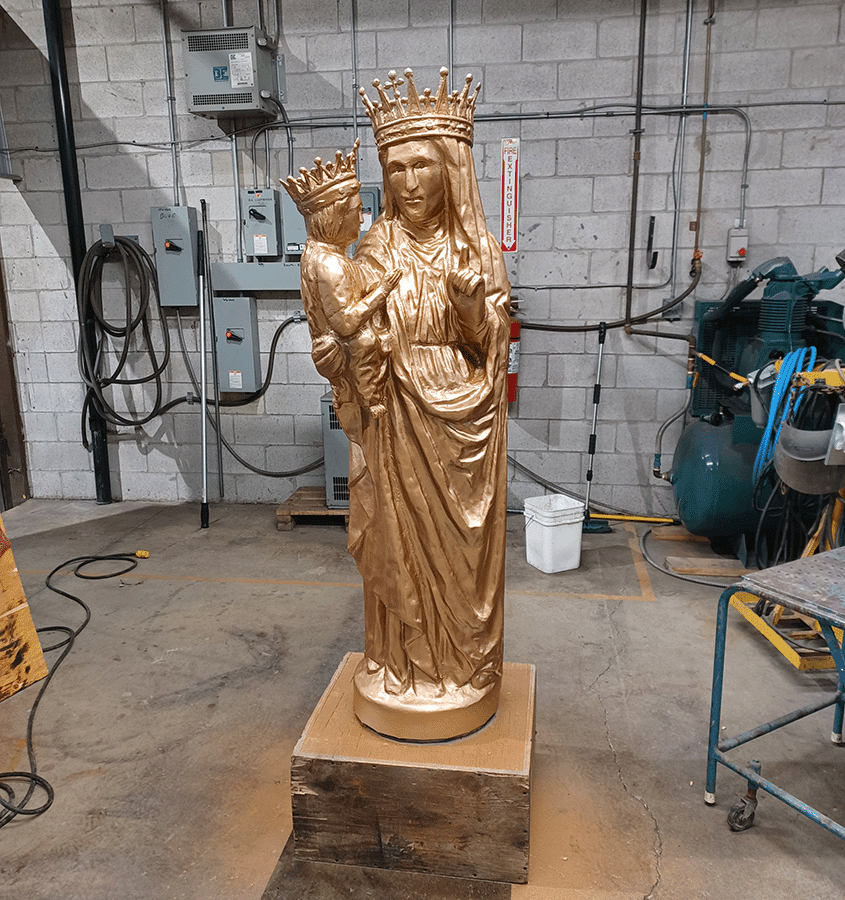 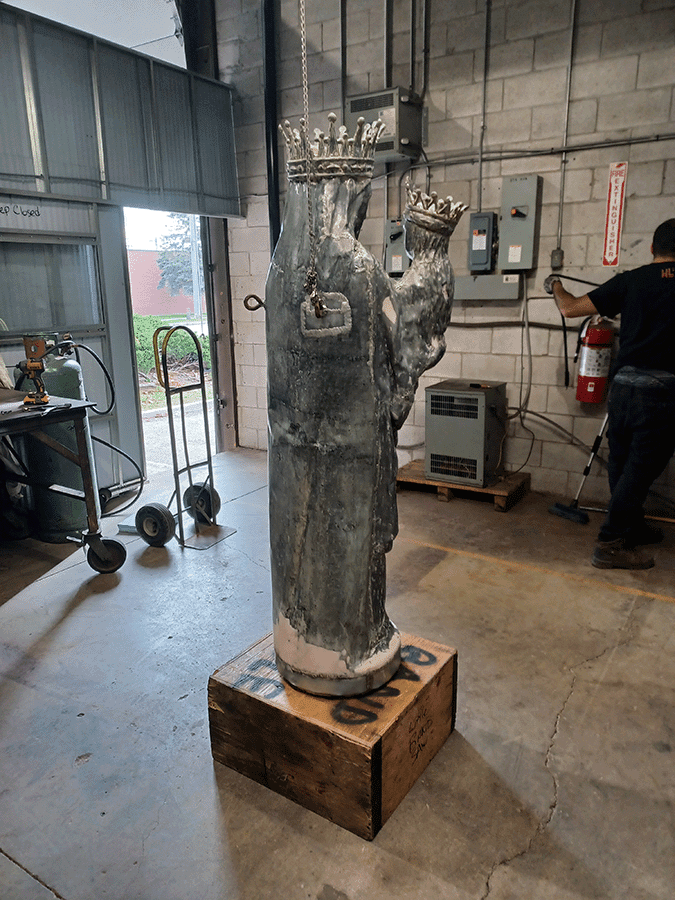