The Toronto Club, founded in 1837 is the oldest private club in Canada, and third oldest in North America. The 19th century heritage clubhouse designed by Frank Darling and S. George Curry mixes different architectural styles and opened its doors in 1889. Updates and renovations had of course occurred over the years, for example when the original slate roof was failing in the 1980s it was replaced by H&L with a copper seam roof. Forty years later, it was time to bring the roof back to its original heritage design. Working directly with Toronto architect Spencer Higgins, Heather & Little established a plan for the budget and design. The objective with this update was not to replace the copper roof, but to restore the building to its original grandeur with a new slate roof.

This was an enormously challenging project – the kind of project we like best. Seemingly every day brought a new complication that required our experts to investigate and solve. While we always work to the highest standards, in this case every detail (including those the eye could not see) was executed to perfection. We were mandated to follow only traditional methodology, something we are well equipped to do. However, we always have an eye on the best solution for the project. The architect wanted to utilize an obscure expansion joint in the inlaid gutter at the base of the roof. We had concerns about the longevity of this option and came up with a solution that had a traditional appearance but would be more durable in the long term. We were gratified that the design team put their faith in us and allowed us the opportunity to apply our expertise. In addition to slate, we installed sheet copper roofing where appropriate and copper roof flashing to seal the joints of the main slate roof.

Creating the elegant sheet copper cornice was an exacting process involving hundreds (and hundreds) of dentils. At first glance this doesn’t seem to be H&L metal work, but rather, terra cotta. Sheet copper work it is, however, which had to be laboriously finished by hand with wire bush and elbow grease. Each dentil had to be meticulously brushed by our craftsmen to provide it with the necessary tooth, so that it could take the paint and sand treatment that would give it its terra cotta finish. A variety of samples were sent to a lab to be assessed for the optimal degree of roughness. It was truly a Goldilocks process, it couldn’t be too deep, or too smooth- it had to be just right.
Working on restoring the home of such a prestigious private club – while the members were still attending – came with its own challenges. Discretion became our middle name over the course of the installation, including only hammering nails for the slate roof in off hours. This was both a rewarding and demanding project, with beautiful results we are enormously proud of. To learn more about the Toronto Club roof restoration browse our gallery of images. 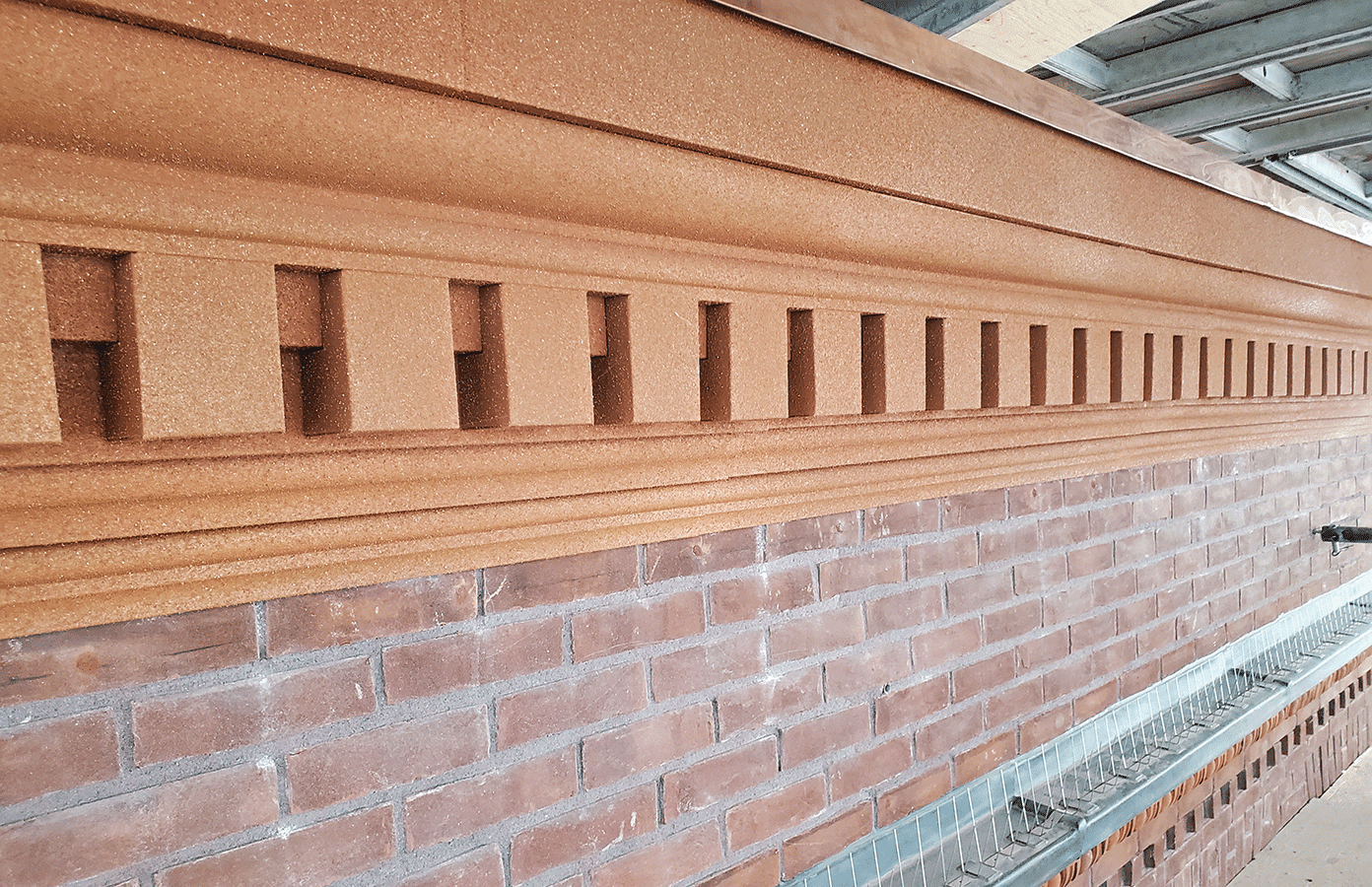 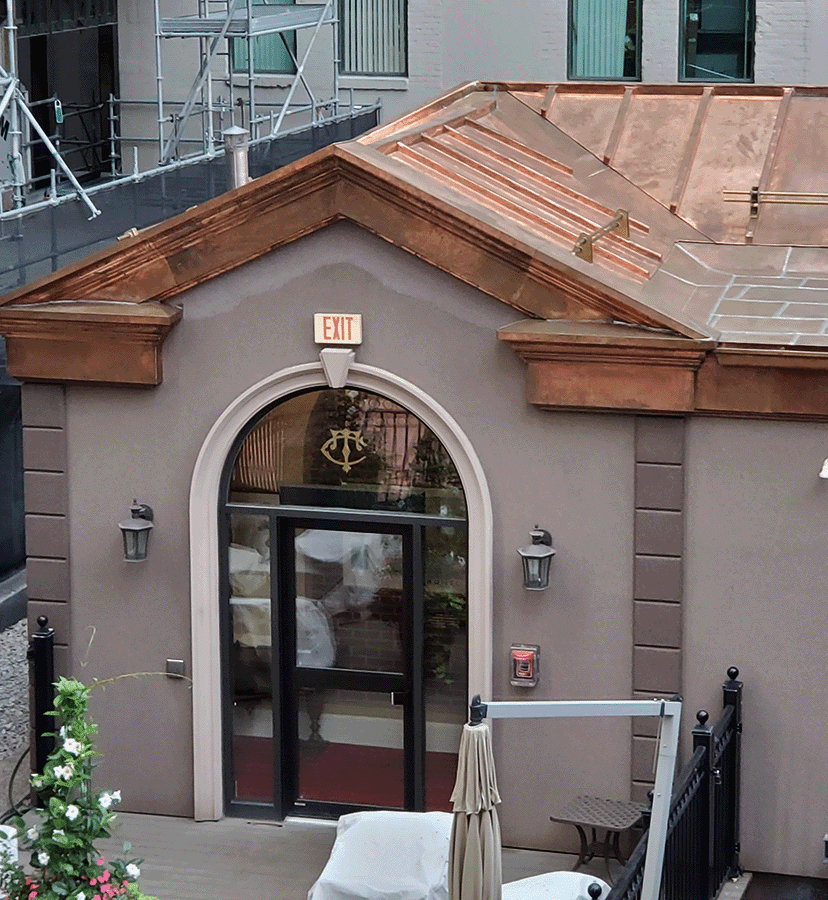 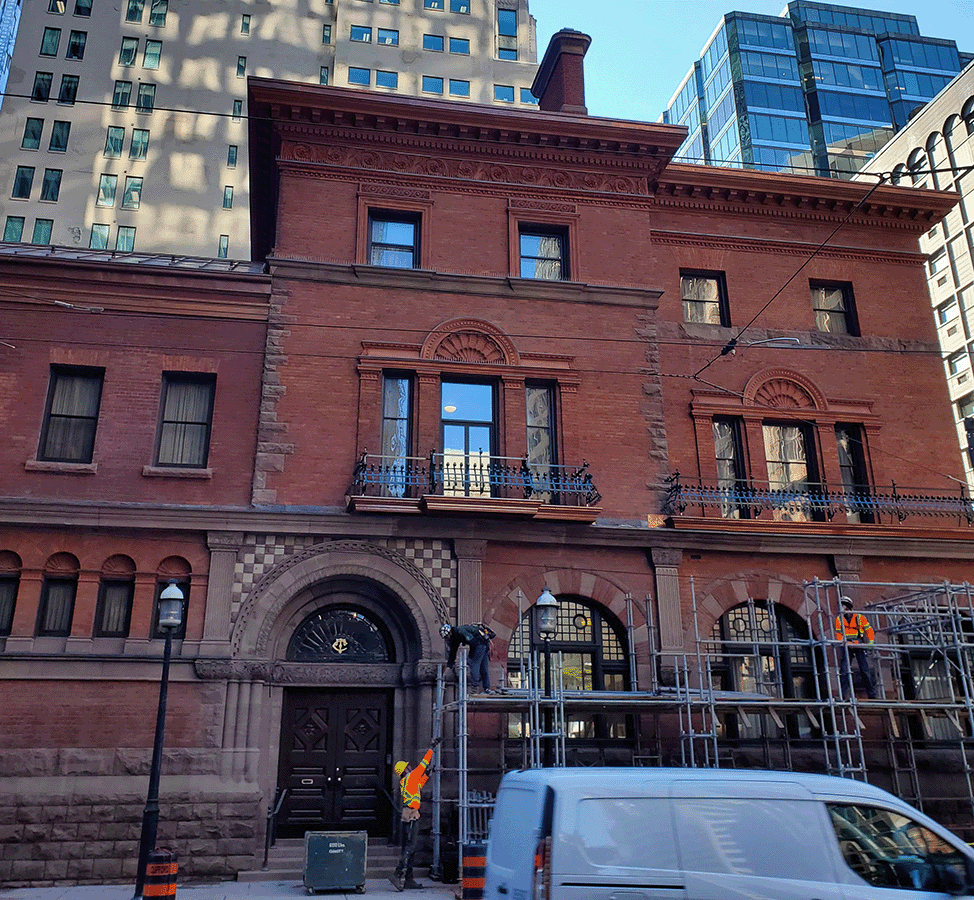 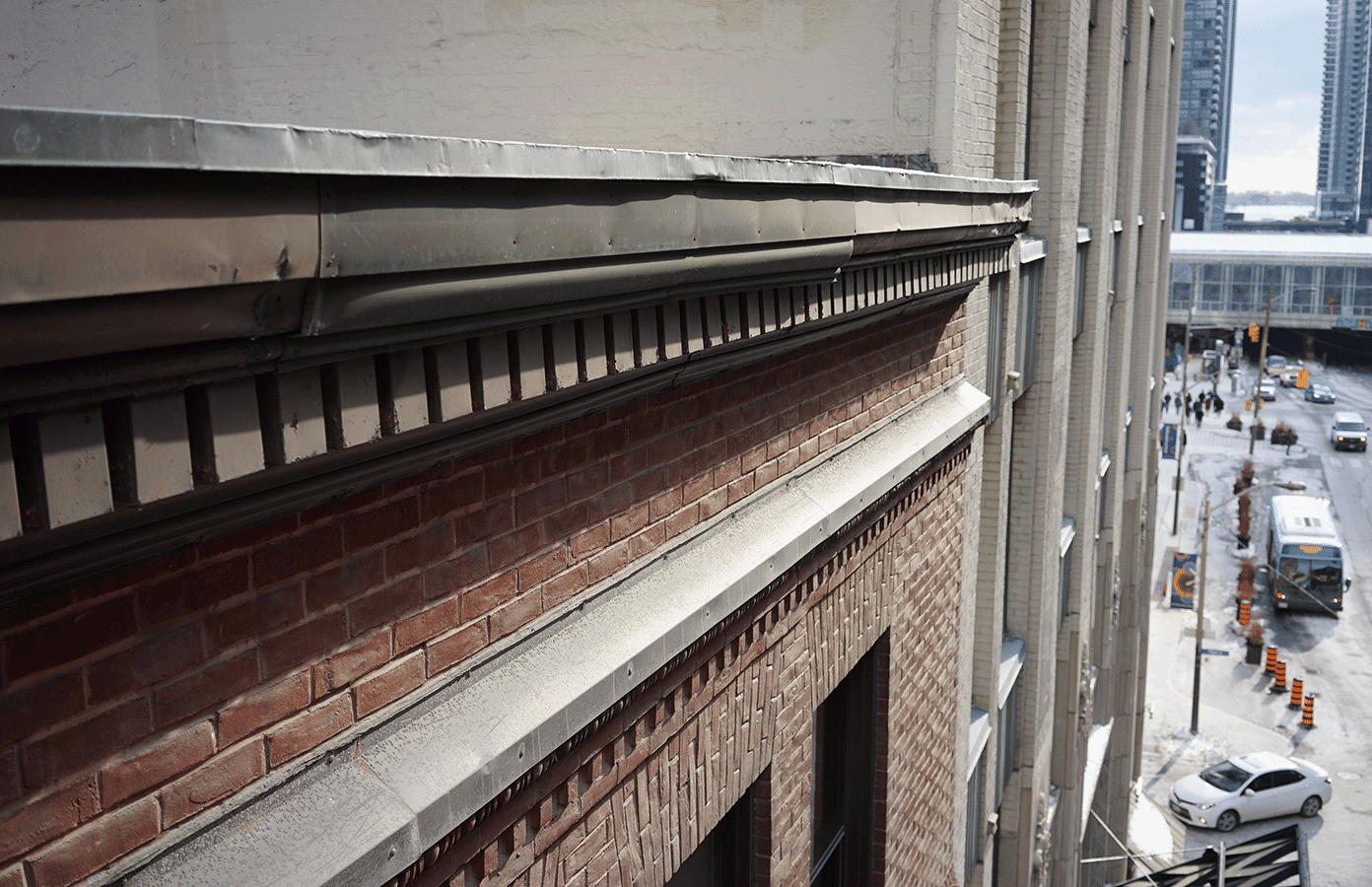 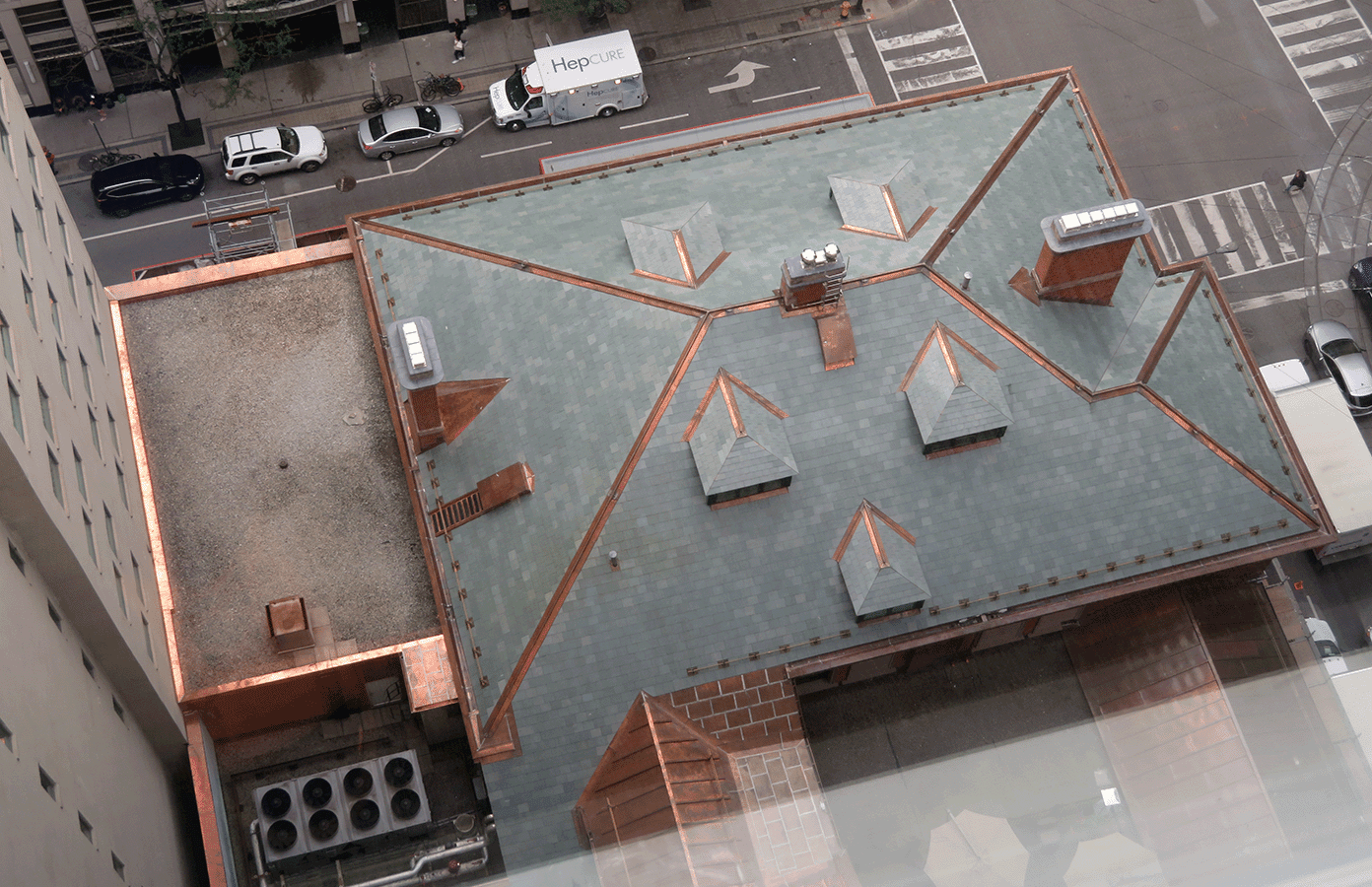 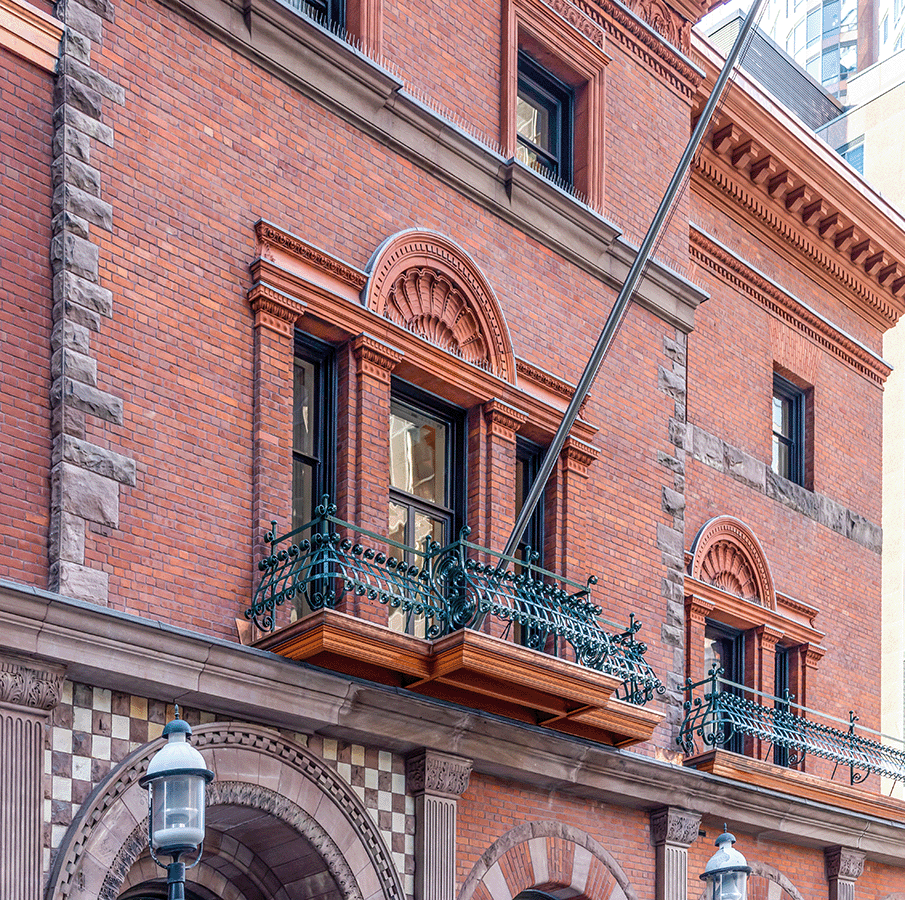 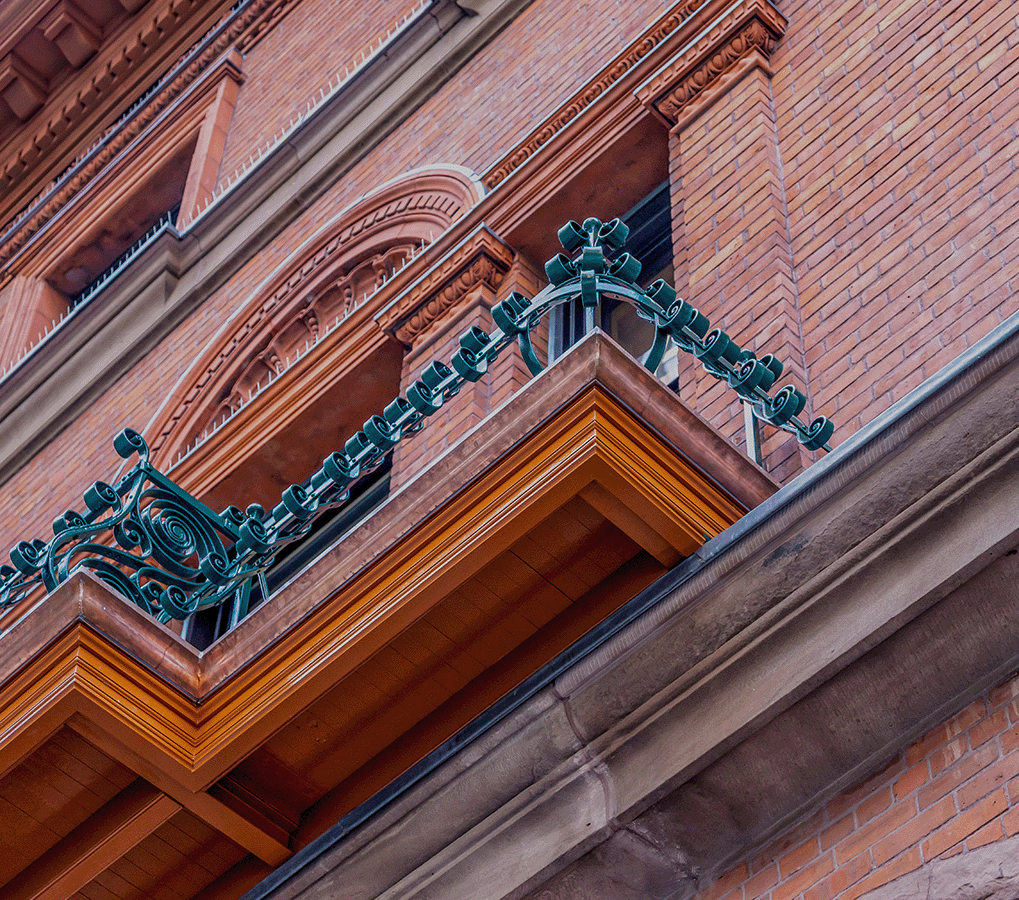